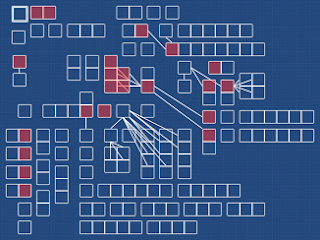 What the blue images with all the boxes are 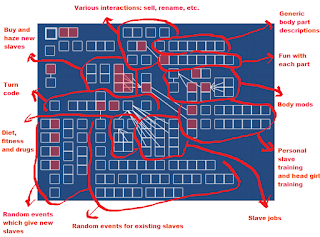 Here, have an ugly MS Paint explanation of what the blue pictures mean. I really should have explained this in the introduction.

I've been posting blue images with a lot of little white boxes with progress updates. These are screenshots of Twine 2's game design interface. They show the broad structure of the game. Just like posting updates gives me a sense of progress, you can see the progress of the game as the passages in the image shift and multiply.

If I were using Twine 2 more or less as intended the structure would look far more linear, with long trees of passages connected by arrows. Instead, since this is a turn-based sandbox game, it doesn't look linear. And, since I've thrown Twine 2's standard link structure out the window (with great force), the normal passage-to-passage arrows are mostly absent.
Posted by FC Author at 10:03 No comments: 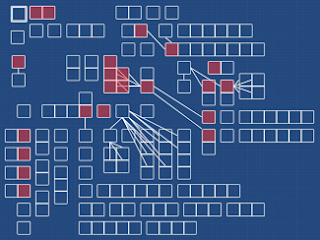 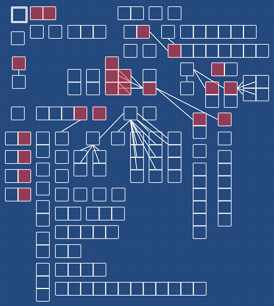 Not many updates for today, just some random event work:

We'll see how playtests go, but if it turns out to be too frustrating for players who want to get at specific relationship content to wait for the appropriate random events, I might add a special, restricted slave market that sells that kind of merchandise. I like that stuff being special though.

Random events take a disproportionately long time to write because although they usually appear to be 200-300 words from the player's perspective, there's a lot more behind the scenes. There are at least 2 choices presented for each, and I usually try for 3. Many sentences have alternate versions, too: any time a slave has dialog, there are several alternate versions for slaves whose speech is different or even absent. When writing simple fiction prose I can sometimes beat 1000 words an hour so this process feels slow as hell.
Posted by FC Author at 18:10 No comments: 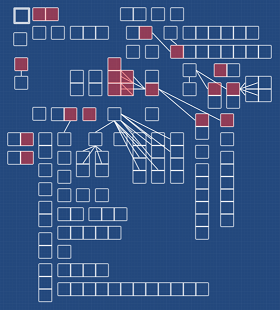 Practically, players will probably only ever see part of the random events because so many are based on specific kinks or gameplay choices. That means the game needs enough that the average player won't be repeating them constantly. There are 44 in game, and I feel like at least that many again are necessary before it feels properly playable. 100 is a good round number and I think I'll use it as a working goal for random events before public release.
Posted by FC Author at 18:34 2 comments: 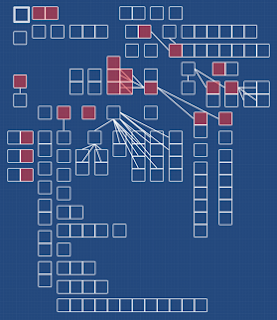 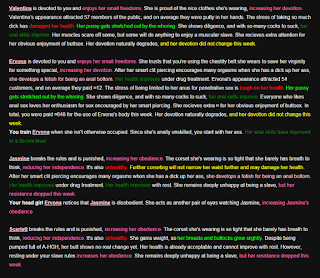 This is an end-of-turn report screenshot from yesterday.

I dislike h-games that require the player to try to figure out what descriptions mean in terms of stats. To clear things up I've been coloring short phrases whenever the described situation effects a slave's stats: for example, red text notifies the player that a slave's health has decreased.

Usually this is fine: a paragraph will typically have only a single colored phrase. However, this end of turn screen includes a maelstrom of stat effects and has gotten really garish. I'm reluctant to break flow with explicit "+1 health" stuff, so for now I've reluctantly left it as is.

I may have been a little misleading earlier when I mentioned the hardcoded slaves from the thread on /d/. These are actually just a supplement to the main source of slaves in the game, which is code capable of spitting out a near-infinite cornucopia of slaves.

I try to avoid calling it a random slave generator because it isn't random at all. At present a slave is described by 61 different stats, from birth name to nipples to oral skill. The code generates them one after the other, and many of them modify each other. For example, the more weight a slave carries to start with, the larger her breasts are likely to be. A slave's age has a chance to alter the starting point of 10+ other stats. There's even a hidden race stat that helps determine starting skin and hair color: that wasn't originally the case, but I got tired of every other slave being generated with dark skin and blonde hair!

In-game, there are currently four slave markets, and three of them use the procedural slave generator. The generator runs and then the market's code modifies the result to give the slave that market's particular flavor. For example, one of the markets specializes in lower-cost merchandise, so its slaves receive reductions in obedience, health, and other stats.

Finally, there are currently nine random events that can result in the PC acquiring a new slave. These also use the generator, but have heavier-than-usual stat changes to fit the events. For example, one random event involves enslaving a business rival; the resultant slave will tend to be older but more experienced and attractive than usual.

There's even two events that result in the PC acquiring two slaves: a mother daughter pair. Those were a lot of fun to code. The generator produces the mother first, stores her, and then modifies her stats heavily to produce the daughter.
Posted by FC Author at 09:15 5 comments: 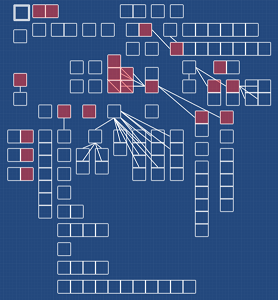 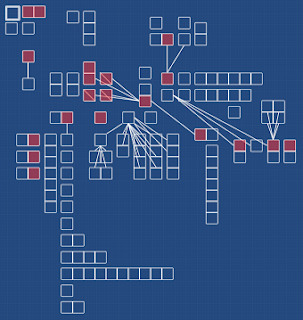 My posts on /d/ about ideas for this were the first progress updates I'd ever done, about anything. It's great; posting progress makes me want to make more progress, which makes me want to post progress. So, updates for today:
Posted by FC Author at 11:58 No comments:

This post is closed for submissions as of November 5. Please submit slaves for inclusion here using the new upload function.

As I mentioned in the introductory post, the game uses mostly randomly generated slaves, but does include a database of unique slaves based on descriptions of slave girls submitted in a thread on /d/, now archived here. I found it was great fun to add others' ideas of a slave girl to the game, and to my surprise posters on /d/ seemed to like providing them. There are 100+ now statted in game. That's enough, but I'd be happy to add any posted in the comments here.

If you post one, here's what I need:
What's her slave name?
How obedient is she?
What's her general appearance? An image is helpful if you have one.
Does she have any surgical alterations, like implants?
Does she have any tattoos, piercings, or other cosmetic modifications?
How sexually experienced is she?
...and, of course, anything else significant.

Note that the setting is near-future, so consider yourself limited by what modern surgery can do. Heights over 6'6", extra limbs, and elves are all outside the scope of the game. I can't promise perfect translation to the game, because I only have stats for so much, but I do my best and will add stats if I really like an idea. Naturally, by posting you surrender all rights, etc. etc. to the idea posted. Legal rubbish.
Posted by FC Author at 11:22 18 comments:

Where this is now

I will get the question I got a lot of over at /d/ out of the way: this is still a long way from completion. As promised elsewhere, I will post it on /d/ (and here) when it reaches something like alpha status.

The game's heart is prose that adapts to slaves' attributes. For example, the game will describe a slave the player is examining in 100-200 words, but this short description is pulled from descriptions totaling over 3,000 words. The goal is that every scene in the game will read differently if you experience it with different slaves.

Right now, according to Twine 2's story statistics function, Free City clocks in at 74,000 words, though of course many are repetitions with variations for different slave attributes. Individual slaves have a whole cloud of attributes from age to mental state to sexual experience to hair color and style to tattoos and piercings, and more, all of which affect both the text the player sees and gameplay. I tried to calculate how many different slaves the random slave generator could create, and stopped when it became clear the answer would be trillions.

Right now, the game functions well enough that I can playtest it myself. However, there's a great deal of work to do, in three main areas:

What this is and where it started

The excuse plot of the game is that it's twenty minutes into the future, and the beginnings of environmental and societal collapse have led some wealthy people to carve out little extranational enclaves called Free Cities. Think modern city states, but following an extreme kind of anarcho-capitalism. Don't worry, the mild futurism gets the hell out of the way after two screens and lets the player get on with the fun.

The list of kinks included is way too long to give here, but includes a lot of extreme stuff like involuntary surgical alteration, sexual slavery, and most other things associated with slavery fantasies. I am doing my best to segregate content out so that the player won't be blindsided by things they didn't sign up for; notably, there is content for slaves with dicks, but this can be turned off at game start.

Where it started
This all came out of my head, of course, but it's been helped along generously on 4chan's /d/ board. To motivate myself and add a little spice to the game, I had the idea of asking /d/ to describe basic slaves to add to the game. The game is capable of producing a near-infinite number of randomly generated slaves, but the ones /d/ created are instead hard coded and unique.

I expected polite interest and a handful of slaves; instead I got a thread that hit bump limit and more than 100 slave descriptions, the vast majority of which are now in game as best I can stat them. I definitely feel my coding skills aren't up to that interest, but I'm working on that as I go. If you're interested the thread where that happened, it's over on the loveisover archive, here.

Of course, many posts described slave ideas that the game can't do justice to. This proved extremely helpful because it showed me areas where I could add content. I will absolutely add more unique slaves if people feel like generously sharing their ideas with me. Feel free to do that in the comments here.
Posted by FC Author at 10:45 4 comments: